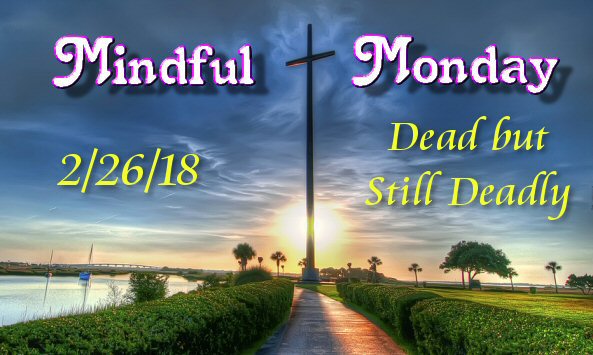 I just finished reading day one of the devotional by Louie Giglio from his book, Goliath Must Fall.  This hit home with me because I really have been feeling like the enemy is attacking me hard of late.  The Bible tells us in Genesis 3:14-15:

“The Lord God said to the serpent,

“Because you have done this,
cursed are you above all livestock
and above all beasts of the field;
on your belly you shall go,
and dust you shall eat
all the days of your life.
I will put enmity between you and the woman,
and between your offspring and her offspring;
he shall bruise your head,
and you shall bruise his heel.”

(there’s a good explanation about this passage here)

Satan thought he had Jesus defeated when he watched Him die on the cross, but 3 days later, Jesus demonstrated to the world that He is the one who crushed Satan when He rose from the dead defeating death and Satan once and for all.   Satan is crushed but he is still deadly.  Until that day he is thrown into the lake of fire (Revelation 20:10), he still is roaming the world like a roaring lion seeking who he can devour (1 Peter 5:8).

So what can we do?  Let’s read what Louie Giglio has to say in this week’s devotional:

The epic tale of David and Goliath is one of the most well known stories in the Bible. On one side of the Valley of Elah stands the Philistine army, with their nine-foot-tall champion named Goliath. On the other side of valley stands the Israelite army, cowering in fear under the leadership of their king named Saul. For forty days Goliath has been taunting the Israelites and holding them in the grip of fear. Day after day he has been challenging them to send out one soldier to face him man to man. But so far, nobody has volunteered.

Perhaps you can relate to the plight of the Israelites. Some kind of giant is standing before you, taunting you, harassing you, and insulting you. Maybe it’s fear. Maybe it’s anger. Maybe it’s a feeling of rejection. Maybe it’s the sneaky but all-too-familiar giant of comfort that compels you to live for something lesser. It might even be an addiction.

Whatever this giant is in your life, day after day it has been robbing you of power. You’ve tried to stop the taunts, but you feel immobilized. Held back. Paralyzed from moving forward. Ultimately, you know you’re not living the fullness and freedom of life that God intends for you.

The good news is that God has made a way for these giants to fall. It starts with believing that even though the giant you’re battling might be big, it’s not bigger than Jesus. In fact, He has already defeated the giants in your life. When He came to this earth, He endured hell for you on the cross and rose from the grave so you could shake off the prospect of a doomed life. He came to set you free from the giants who rise up against you and hold you paralyzed in fear.

Jesus has already overcome the enemy. However, as we read in 1 Peter 5:8, the devil still “prowls around . . . looking for someone to devour.” In many ways, he is like a snake with its head cut off. When you kill a snake, you have to be sure to bury its head, because even after death the serpent holds a lethal dose of venom in its fangs. If you step on a dead snake’s head, you can still get poisoned. In the same way, even though Jesus broke the power of Satan at the cross, he can still inject his deadly poison into our lives. He is dead but still deadly.

The goal then, as we will discuss in this study, is not to step on the snake’s head. In practical terms, this means resisting the devil (see James 4:7), equipping the defenses Jesus has provided (see Ephesians 6:10–18), and leaning into his sufficiency (see Proverbs 3:5). It means remembering that he is your David in the story—and you can never bring down giants through your own courage, willpower, or efforts. It’s always Jesus who brings the giant down.

If you truly want to see victory over the giants in your life, you need to understand your dependency on the all-sufficiency of Jesus Christ. Victory is all about trusting in Christ and not about trying to succeed. To take the first step against your dead-but-still-deadly enemy, you’ve got to make this paradigm shift in your mind. Christ is the only force that brings change.

How do you respond to the notion that Jesus, not you, is the David who has defeated the giant in your life? What are the implications of this for the way you live your life?

Jesus came to earth to crush the power of sin and death, and he has already overcome the enemy. What difference does this make as to how you view the giant in your life?

What are some ways you go about drawing close to Jesus so that you won’t step on the venomous head of your defeated enemy?

You can take a look at Louie’s book here —>