Calvary, Couponers, and Crafters » Bible Prophecy » End of the Age Updates for 4/17 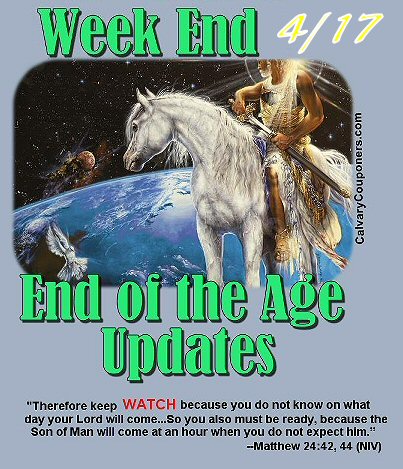 I’m a little late posting this as I’ve been busy making graphics for planner printables, but I stopped what I’m doing to get this out to you so you’d have it first thing in the morning. I know a lot of you tell me you glean a lot from this post every Sunday evening and I do as well!

Other Videos from Steven this past week:

Spirit of Reconciliation in the Year of Mercy

What the Vatican Plans for the Two Witnesses

SkyWatch TV:  “Avi Lipkin:  Rome is Next for ISIS”:

World Bank: Palestinian Authority losing $285 million a year due to agreements with Israel

Hamas: Israel to ‘pay dearly’ for any ‘stupid moves’

Netanyahu: We will do what it takes to fight terrorism

MK Boker: Withdrawing IDF from Judea and Samaria will return us to days of bus bombs

Syria vows to use ‘any means necessary’ to take back Golan

Israel Will Never Give Golan Heights to Syria, Netanyahu Vows

Military officials pushing for increase in US troops in Iraq

Erdogan: We must cooperate with Iran in war on terror

Iranian Foreign Minister: Expects the US to fulfill its nuclear deal commitments

NJ Night Sky: Jupiter, the prince and the moon get together

Do Earthquakes in Japan and Ecuador Signal an Epidemic? Scientists Say No

Alaid volcano on the Kuril Islands erupts to 10,000ft

Flooding and severe storms to rock the Plains through Monday

Devastating photos of the California drought, which just entered its 5th year

Yellow fever outbreak in Angola is ‘threat to entire world’