Calvary, Couponers, and Crafters » Bible Prophecy » End of the Age Prophecy Updates for 7/3

End of the Age Prophecy Updates for 7/3 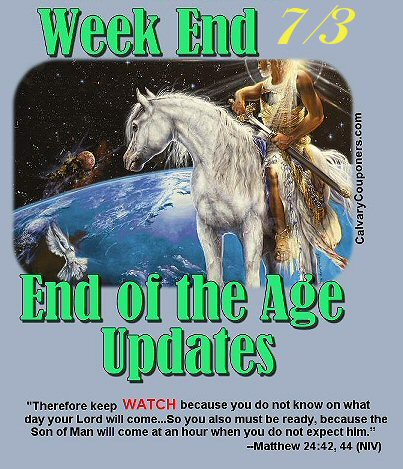 This is a few days late as I’ve been under the weather with some sort of bug, but better late than never 🙂  Here are our updates for this week:

Prophecy in the News (Gary Stearman): “The Barley Harvest”

“The Encroaching Darkness with Chuck Missler”:

Prophecy Watchers (also Gary Stearman):  “Tom Hughes:  No Prophecy in the Churches” Why is prophecy not being taught in churches?

This one is a few months old, but very enlightening. Pastor Jack Hibbs of Calvary Chapel in Chino Hills, California, “What’s Happening in the Middle East Israel”:

Two Witnesses, Are They Here?

Prelude To The Third Temple Coming To Jerusalem

Update A Message To The Jewish People

EU Transforms To A Super State

“His Channel:  World News Briefing”  Tom Hughes and Barry Stagner 6/30/16 (click on image below to bring up page):

Jerusalem Channel, “Is Daniel’s Prophecy About to Be Fulfilled?”:

LA MARZULLI –(nothing new this week)

Tens of thousands of Syrians trapped in ISIS fight, many starving, UN warns

Kahlon to PM: Step up Jerusalem construction in response to terror

Netanyahu in Entebbe: ‘When Yoni was killed, our world collapsed’

Istanbul nearly a ghost town as tourists stay away

Jordan determined to sign a nuclear cooperation deal with the US

China says to crackdown on fake news from social media

Undeterred By FBI Investigation, Obama To Campaign With Hillary

As it closes in on Jupiter, NASA’s Juno spacecraft faces peril

Blas Strengthens Into First Hurricane of the Eastern Pacific Season

Flooding kills more than 180 people in central and southern China

Flesh-eating bacteria scare along Gulf Coast has locals on alert

The Dolly legacy: Are you eating cloned meat?