Calvary, Couponers, and Crafters » Bible Prophecy » End of the Age Prophecy Updates for 8/7/16 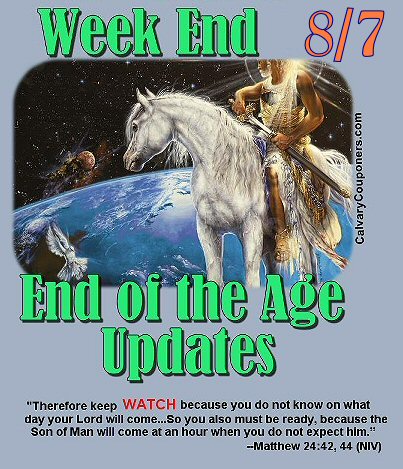 How are you all?  Heads spinning from all the American election stuff going on?  I’m so over it all…  It was a busy week anyway and I realized the other day in the midst of it that I didn’t get my Mindful Monday post done (sorry about that). My son goes back to school in a few weeks and I hope to start getting all my regular posting back on track (coupons, crafts as well as my weekly Christian posts).  I keep hearing from some of you who keep having Rapture dreams!  I had two last days dreams the past two nights.  They weren’t Rapture, but they were clearly leading up to it happening in my dreams. It shouldn’t be long before the Lord’s return! Last night’s was that my neighborhood was invaded by Is lamic extremists and myself and other neighbors were trying to escape. It was a lot more detailed (and scary) than I’ll go into here for lack of time and space). You know how dreams are…once escaped the Lord was waiting for us just outside the neighborhood. I was so glad to wake up 🙂 Maybe it was a reminder that we have to go through persecution before the Lord’s return but that He is always there with us and eventually there will be no more persecution once we’re on the other side 🙂

Well here are our weekly prophecy updates. Tell me what you think!

Pastor J.D. has special guest AMIR TSARFATI this week, so I’ll be sharing those videos just before today’s which features Amir as well.  This is a real treat for us this week!

Christ in Prophecy (David Reagan): “God and the Weather, Part 1”:

Prophecy in the News (Gary Stearman):  Kevin’s Korner:  The Media and Terrorism:

“If Ukraine Attacks Donetsk It Will Be A War On Civilians”, August 6 2016:

Other Videos This Past Week by Steven:

Is Kiev Planning A Deadly Air Attack On Donetsk

Breaking: Russian Tanks May Be Rolling Into Ukraine

Avi Lipkin His Views On Russia With Israeli News Live

What We Stand For

“His Channel:  World News Briefing”  Barry Stagner and Mike MacIntosh 8/04/16 (click on image below to bring up page):

Iran executes nuclear scientist who had ‘defected’ to US

Clinton admits she may have ‘short circuited’ answers on email controversy

Trump on Clinton: ‘She took a short-circuit in the brain’

Is the central banking system on the verge of another crash?

Six Dead in Mexico as Remnants of Earl Trigger Landslides