Calvary, Couponers, and Crafters » Bible Prophecy » End of the Age Prophecy Updates for 10/3/16 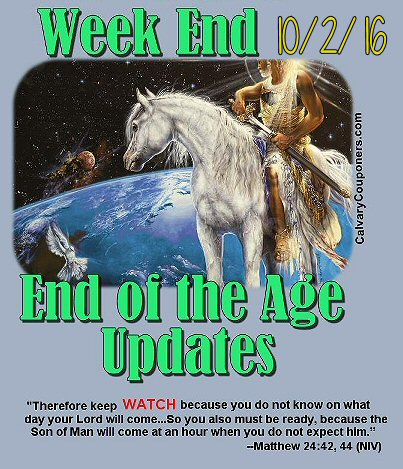 Forgive me for being a day late with this.  The past few days have been really busy for me. Better late than never, as they say, and I hope you can glean a lot of good info from this update.  Have a great week!

Joel C. Rosenberg, “What is the Difference Between Biblical Eschatology and Apocalyptic Islamic Eschatology”:

(they’re in their new church!)

Prophecy in the News: “Kevin’s Korner: Eyes on Israel”:

PROPHECY UPDATE OCT 2, 2016 – US AND RUSSIA ON THE BRINK OF A MILITARY SHOW-DOWN:

US Halts All Bilateral Communications With Russia Over Syria:

Global Conflict Grows By The Day

US Carries Out Its Threat Against Russia

Iraq plans to Sue US for War Crimes

Trump For Jerusalem as Israel’s Capital

His Channel:  “World News Briefing”  Tom Hughes and Mike MacIntosh 9/29/16 (click on image below to bring up page):

EternalRhythmFlow (Scotty Clarke):  “The Revelation 12 Sign is EXACTLY on The Feast Of Trumpets September 23, 2017 – CONFIRMED”:

Rosh Hashanah or The Feast of the Trumpets?

40 Million Russians Going To Bunkers During October 4th To October 7th Drills – What Do The Russians Know That The American People Don’t Know?

The 5 Most Dangerous Wolves Preying on Christians

Syrian children return to school as airstrikes on Aleppo continue

Colombia voted against impunity for FARC, not against peace

Bush Daughter and Huma Abedin Together in Pro-Hillary Tweet

Donald Trump has some Latinos so unnerved, they’re turning to the supernatural for help