Calvary, Couponers, and Crafters » Devotionals » Mindful Monday Devotion: Abide and Keep Your Eyes on the Prize

Mindful Monday Devotion: Abide and Keep Your Eyes on the Prize 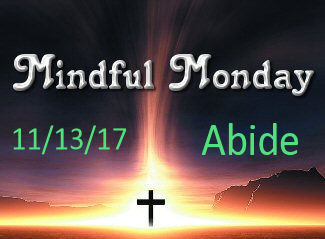 Are you like so many other believers in this world who are feeling downhearted with all that’s going on in the world today?  All that you and/or your family is going through?

We know that in the END we win, if we belong to Christ and that gives us great comfort, but what do we do in the here and now when things seem to be attacking at every turn?

Lately the Lord has been giving me one word:  Abide.

Sometimes we just are not in control of what happens to us. We pray and we try to learn to trust and as we pray it through and try to roll it off our backs, we sometimes feel like there’s SOMETHING we should be doing to fix things. Well, sometimes that may be true, but often it may just be that the Lord is using the PROCESS of what’s happening in our lives to teach us; to build something in us that makes us the people He wants us to be for eternity.

This life isn’t all there is! I like to think of it as a training ground for eternity.  Eternity isn’t just floating around on a white fluffy cloud playing a harp.  We will be working, playing, rejoicing…there will be plenty to do! Did you know that the Bible tells us that we will judge angels?  We will judge the nations alongside Christ!  There’s a lot to do there!  We will still be who we are now, just glorified versions of ourselves!  We will be trusting in Christ and our Father, we will know patience and hope and love in a more deep, richer, more profound way than we know here in this fallen world.  That isn’t just a robe we put on when we cross to the other side…we start learning those virtues right here! I have learned over the years with all that’s happened with my family that sorrow and trials are never wasted.  The Lord uses them to teach us and mold us into the sons and daughters of the King!

What does just being still look like?  I think it’s one word:  Abide.

Sometimes we have to stop racing around and striving and driving ourselves crazy and learn to BE STILL…and ABIDE.  We just continue to run the race…not in a competetive way to beat this person or that person, but to be keeping our eyes on the prize so we don’t become distracted.  Like a race horse with blinders on…he doesn’t seem to worry about where he’ll end up.  He can only see straight ahead of him and his only concern is to keep going straight ahead knowing he will receive a reward at the end of the race.  He can only see straight ahead, he doesn’t look at the other horses to his left or his right. It isn’t a race to beat the other horses to him. He just obeys his rider and looks straight ahead and pushes on.

“ABIDE” and “KEEP YOUR EYES ON THE PRIZE”

“Not that I have already obtained all this, or have already arrived at my goal, but I press on to take hold of that for which Christ Jesus took hold of me.  Brothers and sisters, I do not consider myself yet to have taken hold of it. But one thing I do: Forgetting what is behind and straining toward what is ahead, I press on toward the goal to win the prize for which God has called me heavenward in Christ Jesus.” -Philippians 3:12-14

Won’t you abide with Him…with me? 🙂

May you have a blessed, productive, yet STILL week 🙂

Still in His grip,