Calvary, Couponers, and Crafters » Bible Prophecy » End of the Age Updates for 6/19 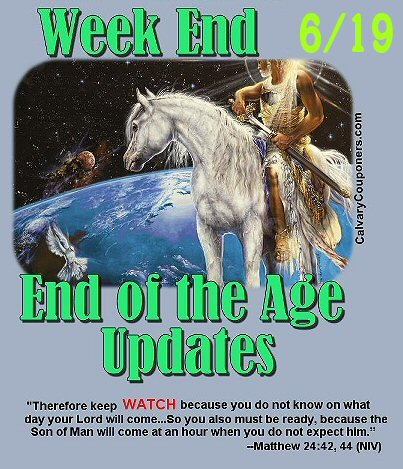 Things are really building up in the world geopolitically and how it relates to Bible prophecy!  Last week pastor J.D. Farag devoted his whole service time to it when normally he gives his usual Sunday message and then adds on a time at the end for his Middle East update.  I’ll get right to it!

The most recent concern among prophecy circles in Facebook groups is the following video of the Saudi Deputy Crown Prince being rushed into the White House where no press is allowed.  It may be nothing, but it may be something…decide for yourself:

Israeli News Live (Steven Ben DeNoon): “Did Pope Francis Hint At The Mark Of The Beast”:

Prophecy Stays in the Headlines

Israel Prepares For War Amassing Its Military In The Golan

Opal Singleton on Predators, Social Media, and Your Children

“His Channel:  World News Briefing”Barry Stagner and Mike MacIntosh 6/16/16 (click on image below to bring up page):

DAHBOO77:  “Something Is Going On” – And It’s Worse Than You Thought!

Livni: A referendum is needed now, to see if Israel is going in a two-state direction

Israel goes back to drawing board on Hamas

Hi-tech leader: ‘We don’t want to leave Israel, but it seems the easiest thing to do’

Barak: Netanyahu in a panic, knows the end of his reign is near

Egyptian Court sentences Morsi to 40 years; others sentenced to death

ISIS Is Close to Losing Fallujah. Here’s What That Would Mean

Russia: US strikes on Assad will plunge Mideast into chaos

Putin – Sense of responsibility will prompt next U.S. president to work with Russia

North Korea may have more than 20 nuclear weapons, warns thinktank

Why the ‘lone-wolf’ terrorist is a myth

Homeless man charged in fire deaths was in US illegally

The salinity of the Sea of Galilee’s water is on the rise, which could affect both drinking water and water used in agriculture

Revelers: Gay pride events a victory over fear after Orlando