Calvary, Couponers, and Crafters » Bible Prophecy » End of the Age Updates for 5/29

Please forgive my absence this past week.  It was a very very difficult week for me as my mom had to go into a nursing home last Tuesday and last Sunday about this time I found out it was going to definitely be happening. Her dementia was also upgraded to Alzheimer’s the morning before she went in 🙁 I’ve always been very close to my mom and she is such a wonderful and Godly woman I owe everything to.  It’s been a very painful time and I needed to focus on that. I’m a very passionate, sentimental girl so it’s really knocked me for a loop.  Prayers appreciated!  I’d appreciate your prayers for direction as well. God knows all about it.

So…on with what’s happening in the Kingdom! 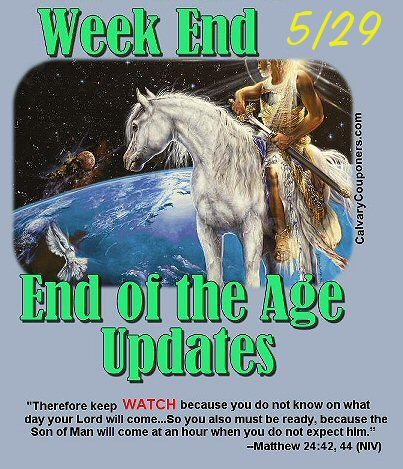 I was reading comments about the news of Jan Crouch having suffered a major stroke  (remember her in your prayers) and one sad comment really summed up what our world looks like today and I thought I would use that as my introduction to today’s End of the Age Updates post:  “The world is becoming dark at a RAPID rate.  He may choose to take her home to spare her of all that is facing us. His will be done.”

Christ in Prophecy (David Reagan): “An Overview of Revelation”

Prophecy in the News (Gary Stearman):  “Islam, Religion of War or Peace?” (With Billy Crone)

John Holler from Fellowship Bible Chapel, Columbus, Ohio – “As it Was in the Days of”

“Tensions Mount As US Sends another Wave of Troops To The Balkans”:

Come Out of Her, My People

RFID Chip Put Into Action – Is It The Mark Of The Beast?

Other Reports from this Past Week from Sky News:

“His Channel:  World News Briefing”Barry Stagner with Tom Huges 5/26/16 (click on image below to bring up page):

New Evidence of a Pre Tribulation Coming of Christ:

We are on the brink of another coalition crisis, says senior Likud MK

Palestinian Leader Wants Time Cap for Any Talks With Israel

Abbas: Yes, Palestinians incite, but so does Israel

1,400 US soldiers & 400 vehicles head to Baltics for Saber Strike drills

A Worrisome Pileup of $100 Million Homes

Clinton email headache is about to get worse

Series of high-magnitude earthquakes around the world

Once dismissed, shark attacks may hit new record in 2016

Pleading for Peace in Chicago: ‘We Could Be Looking at a Blood Bath’