Calvary, Couponers, and Crafters » Bible Prophecy » End of the Age Prophecy Updates for 9/25/16 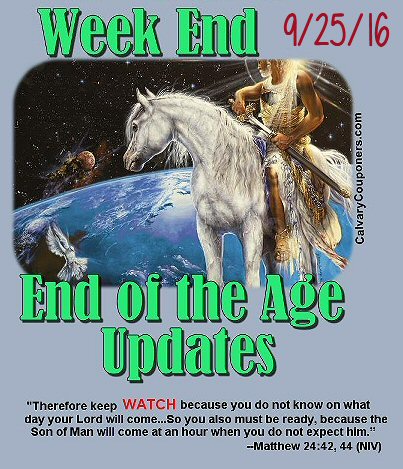 I just love the videos put out with Amir Tsarfati and Jack Hibbs discussing Bible prophecy.  This one was published the other day and it’s about our Blessed Hope.  Something I’m sure we all need! :

This isn’t a video, but an important update from Joel on this coming week’s presidential debate:

Showdown: 100 million expected to watch first presidential debate. But here are three critical issues I guarantee you they won’t discuss.

Prophecy in the News:  “When evil regimes say they want to kill, why do we still refuse to believe them?”:

Damascus On The Verge of Destruction:

Steven has a LOT of videos this week!  Go HERE to see the rest of them!

His Channel:  “World News Briefing”  Barry Stagner and Mike MacIntosh 9/22/16 (click on image below to bring up page):

“Reconciliation Is an End-Time Ministry”:

THINGS THAT MAKE YA GO “HMM…”

(Share your thoughts about these. I’d love to read your responses! I’m not endorsing these, but they’re head-scratchers):

I’ve been seeing this SO often, tell me what you think of this:

A Prophesy of a TSUNAMI Hitting the Eastern Seaboard In USA (Words from Jesus):

Netanyahu: I’ve enjoyed all my meetings with Obama

Hamas leader: I won’t run in next elections

Trump Threatens to Seat Former Bill Clinton Mistress in Front Row at Debate and She Accepts!

UK ‘did not vote for hard Brexit’, George Osborne warns

India’s Modi hits out at Pakistan after attack in Kashmir

S. Korea: We’ll kill Kim Jong Un if we have to

Has your horoscope changed? NASA ‘does the math’ and reveals 13th Zodiac sign

Megi Quickly Strengthening as a Typhoon in the Western Pacific; Taiwan a Likely Target