Calvary, Couponers, and Crafters » Bible Prophecy » End of the Age Prophecy Updates for 8/20/17 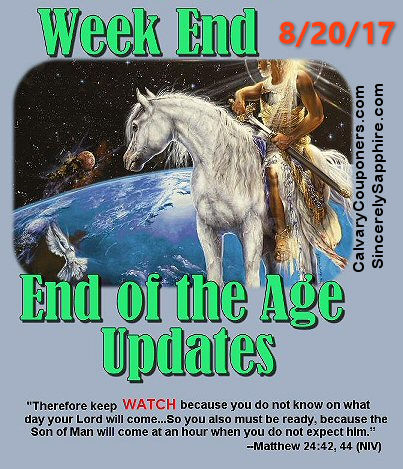 It’s the day after the Great American Eclipse and we are all still here 🙂 Life has gone on as it has and we are still awaiting the return of the King of kings!  See my post about the eclipse here.  So what do we prophecy watchers do now?  Continue to watch! It hasn’t happened yet, but we are assured by the Bible that it WILL happen!

(no new videos that I could find this week, but check out his latest blog posts HERE and HERE)

You can check out Doc’s DVD here–>

You can check out Andy’s book, The Coming Kingdom here –>

Palestinian Authority threatens to cut all funds to Gaza

Soldiers, settlers clash during removal of illegal homes in Yitzhar

Living in a void: life in Damascus after the exodus

Hezbollah uses drones against IS in Syria

Mattis: US, allies to boost troop numbers in Afghanistan

Promising to ‘win,’ Trump says US will keep fighting in Afghanistan

Trump will own the war that bedeviled predecessors

Is someone hacking our 7th fleet? Navy to investigate after USS John S McCain collision

A biometric ring could replace your passwords, cards and keys

Is a solar eclipse a sign of death and destruction? Ancient superstitions believe so