Calvary, Couponers, and Crafters » Bible Prophecy » End of the Age Prophecy Updates for 4/30/17 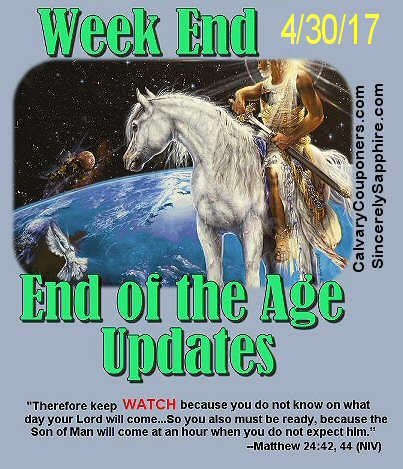 Forgive me for neglecting my blogs during the month of April.  I had my hands full (still do) with Spring cleaning and gathering things for a yard sale I hope to have in June.  Also, a close family member passed away and along with that was the need to nurture my mom more than usual as my cousin who passed away was like a son to her.

So many things have been happening lately on the world scene and prophecy teachers have had their hands full updating us!  Here….see for yourselves! 🙂  —>

You can get Billy’s book on The Rapture by clicking on the image below:

There were a lot more updates at Shofar this past month, so check those out –>

What is the likelihood of war as Israel marks 69 years of independence?

Tensions rise between Turkey, US along Syrian border

The coming US crackdown on Iran

Thousands of Russians Present Letters of Protest in Demonstrations

Tillerson to UN: Act before North Korea does

Trump invites Philippines’ president to US in ‘friendly’ call – White House says Duterte, which promotes the extrajudicial killing of drug users, is fighting a ‘scourge that affects many countries’

In Harrisburg, Trump touts his first 100 days, boasts the fight is ‘just beginning’

Newt Gingrich: Trump vs. the swamp, Round III — Democrats turn to bureaucrats to stop POTUS

Trump: ‘Illegal Immigration Down by Unprecedented 73%’

Bill Gates could be the world’s first trillionaire, but Jeff Bezos is hot on his heels

5.3 magnitude earthquake hits near Kalemie, Democratic Republic of the Congo

Latest Totals: Storm Dumps Over Foot Of Snow Near Denver

EPA Purges Pages That Highlight Climate Change From Its Website

New website offers US women help to perform their own abortions