Calvary, Couponers, and Crafters » Bible Prophecy » End of the Age Prophecy Updates for 10/23/16 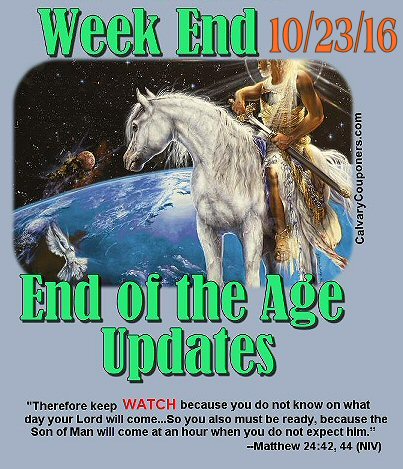 Is anyone else so ready for the US elections for 2016 to be over already?  It’s taking so much attention away from the rest of the world events and those that foreshadow the fulfillment of Bible prophecy and possibly indeed fulfill them.  Let us keep our eyes on the things above!  It’s so easy to become depressed and overwhelmed.  That’s one reason Bible prophecy is so important to me.  Watching for our blessed hope keeps me from all out despair.

“Therefore, since you have been raised with Christ, strive for the things above, where Christ is seated at the right hand of God. Set your minds on things above, not on earthly things. For you died, and your life is now hidden with Christ in God.…”  –Col. 3:1-3

“For the Lord himself will come down from heaven, with a loud command, with the voice of the archangel and with the trumpet call of God, and the dead in Christ will rise first. After that, we who are still alive and are left will be caught up together with them in the clouds to meet the Lord in the air. And so we will be with the Lord forever. Therefore encourage one another with these words.”  -1 Thes. 4:16-18

Those of us who watch world events and compare happenings with Bible prophecy and share with others for their considerations run the risk of despair if we don’t keep our minds on the fact that this life and this world is not all there is.  It’s a dress rehearsal for what is eternal. There are terrible times upon us but they are temporary. The Bible must be fulfilled but after the tribulation of our times and the terrors that must come upon the world are behind us, we have eternity with Christ. No more death, pain, sorrow or sin.  And the knowledge that He will snatch believers in Him away from the worst of it does give us comfort and hope.  With that in mind, here are the prophecy updates for the week:

Joel Rosenberg: What God Is Doing In The Middle East:

Prophecy in the News: Hamas On Campus:

“Jerry Robinson – The Bankruptcy of Our Nation”:

The Superior Word Prophecy Update, 23 October 2016 (The Cancer Within):

His Channel:  “World News Briefing”  Barry Stagner and Mike Macintosh 10/20/16 (click on image below to bring up page):

Jerusalem Channel:  “How Can I Obtain Greater Faith?”:

Have you heard that Israeli leaders are urging Jews to read through the entire Bible, verse by verse, chapter by chapter? Amazing, but true. Here’s the latest.

Amidst ISIS darkness, is an unprecedented spiritual revival happening in the Muslim World? Yes. (My interview with CBN News.)

HUGE LOSS FOR THE ISLAMIC STATE: Dabiq seized by coalition forces. What happened to all the Islamic prophecies of an apocalyptic, End of Days battle in which the West would be destroyed?

After many delays, the battle to liberate Mosul from a hellish ISIS nightmare is about to begin. Here’s the latest.

Carl Lentz to Oprah Winfrey: You Don’t Have to be a Christian to Have a Relationship with God

Netanyahu Thanks Italian PM for Comments Against UNESCO Vote

America’s foreign policy is turning Iran into a world power

Showdown in Mosul: The world against ISIS

Mosul battle: IS lays land mines ‘like a carpet’

In surprise vote, Iraqi parliament bans alcohol from the country

Venezuela braces for turbulence after recall is stalled

Cuban officials and Communist Party members can now get U.S. remittances and more

Attacks on the internet keep getting bigger and nastier

How your DVR was hijacked to help epic cyberattack

Trump vows to sue ‘every one’ of his female accusers